If you are recording electrophysiology data, you will at one point likely have to perform some spike sorting. Spike sorting is when the user distinguishes the activity of various neurons from the background activity (or from the spiking activity of other cells). There are many ways that spike sorting is performed, it can be entirely manual where the user is visualizing the spikes in feature space, the user selects their Regions of Interest (ROI), and assigns a cell ID to that ROI. Other methods boast about being entirely automated, where the data is brought into a, sometimes proprietary, algorithm that likely analyzes various features of the spike data in high dimensional space and classifies the spikes into discrete cell ID's based off of the variance (generally using Principal Component Analysis). Although these tools boast about being "fully automated", there still tends to be some manual cleaning of the cells. Some of these algorithms are bad at combining similar cells, and thus you will have to look at the data, and manually combine these cells. Other algorithms love to combine two discrete cells, and you have to go into the data and separate them.

If you are recording Axona1 data, you will likely be familiar with the Tint method for sorting, which involves a lot of time where the end-user is manually drawing ROI's onto this two-dimensional feature space and hoping that the pesky spikes that don't belong are discarded. As someone who was previously an Offline Sorter (Plexon)2 user, this Tint method doesn't feel satisfactory. Therefore, I have created gebaSpike, a Python Graphical User Interface for spike sorting Axona/Tint data. Instead of having to repeatedly use Tint's ROI + V(t) functionality to remove spikes, I have created a GUI where you can draw a line segment over the cell's waveform and remove any spikes that intersect with the drawn line segment. This is a direct, and I'd argue a more efficient way to remove noise masquerading as a spike within your data.

Keep note, this is a newly developed software that is very minimal in features that it provides. I didn't feel the need to replicate much of the functionality that Tint does well, so I use this program in concert with Tint. You can simply overwrite the .cut files using gebaSpike, and re-load the cut file in Tint to almost seamlessly visualize the effects. 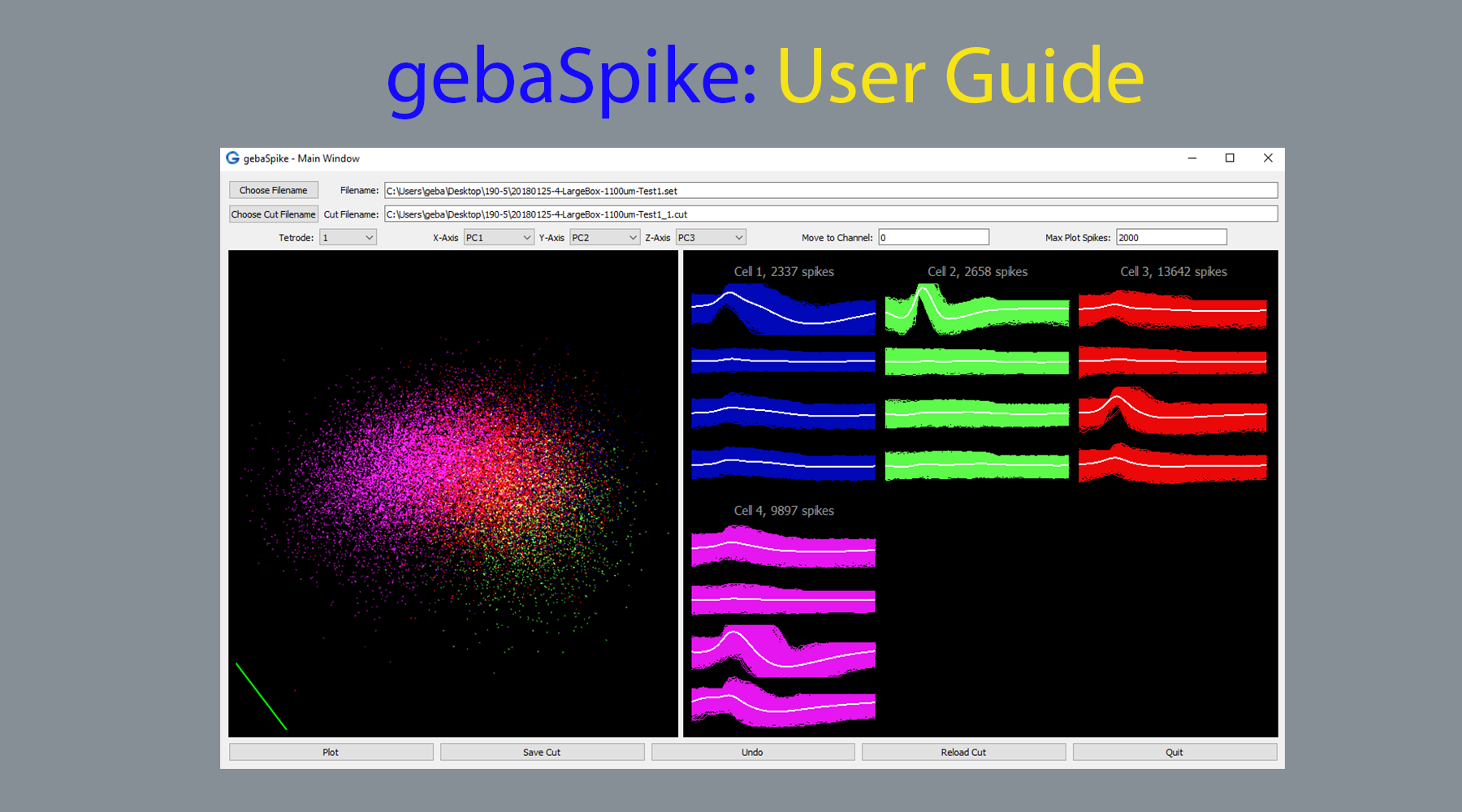 Now that you have installed gebaSpike, I will show you how you can go about using it. If you have not installed it, please see the installation instructions1. If you have any suggestions on features to add to gebaSpike, or bugs that you encounter, feel free to let me know. Keep in mind that this tool does not replace Tint. It simply was a quicker way for me to sort my cells, and thus it is missing some functionality that you get with Tint. I suggest using this in tandem with Tint. You can make …

Are you sure you want to delete the following project: "Project object (17)"?